Congratulations to the North Down team of Sylver and Franck Breteche and Paul Trainor and George Davidson on winning the  IPA Inter-Club Doubles on 21 May, in Bushy Park, Dublin. The other teams competing were Frankfield, Cork and Park PC, Dublin. The North Down team had an unassailable position of 9 wins, with 1 round remaining. This followed up a North Down victory in 2014, when the competition was last played. 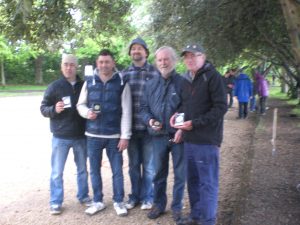